You can Download Serious Sam 4: Deluxe Edition RePack for free 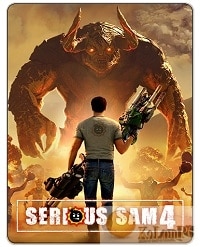 Serious Sam 4  – it’s still the same shooter with a first-person view, but now translates the atmosphere of chaos and mad bloodshed to a new level. More exciting battles are waiting for you, much more guns and blood, more monsters, and more.

The events of the game take place at the very moment when the hordes of the Mental start to attack the remains of the world, destroying the last representatives of the human race. The world is about to collapse, and only the Earth Defense Army can resist it. Well, the head of this army is Sam Stone, the same hero. Take control of him and go towards new battles, create more chaos, smash your enemies into pieces, shed blood for humanity and get to the Mental.

Well, first of all, it would be worth saying that in the new game you will be waiting for an even more impressive arsenal than in all previous games put together that you will like? A powerful double-barrel shotgun, automatic shotgun, saw, machine gun or rocket launcher, or maybe one of the cult guns taken from the past parts? You will have everything at your disposal, so take what you need and have fun.

Like the previous games of the series, this game also supports cooperative passing mode. take three best friends and go into battle. The game will automatically adjust to the number of players and will strengthen your opponents, make them stronger and more powerful, and add more problems. Plus, you won’t be bored, because in the cooperative mode you will also have access to additional tasks, side quests, and more.

The range of enemies has also been expanded, and now you will be opposed by hordes, both old acquaintances from previous games of opponents, and new ones. Here you will find Kamikaze, and headless missile fighters, and bulls-wolfs, and Hnumas, and not only. There will be many enemies, and sometimes it will be very difficult to shoot back, even the four of them.

And also in the Serious Sam 4 you will be waiting for a much more realistic and enjoyable graphics. The developers have placed the game on the finalized engine, worked through the details of the environment, created an atmosphere in which you can feel the real adrenaline rush, and in general, created a game that is no inferior to the classics. In general, you are waiting for another portion of crazy action, with cool guns and new adventures of Sam.