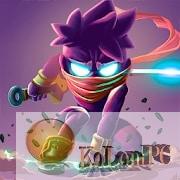 Ninja Dash is an exciting game where you will control a ninja. The ninja training is over and it is time to become a shinobi striker. Pick up a katana and a few shurikens and go on a journey through various worlds, trying to find the stolen master sushi. Run, jump and collect numerous sushi along the way, as well as attack powerful enemies. Cut into pieces strong demons and break all the obstacles on the way. Achieve excellent results and control the movement of your hero with the touch of a finger on the screen.