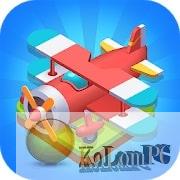 Merge Plane – Click & Idle Tycoon is a cool minimalist simulator of its own airline. Pretty graphics give the impression that the project isn’t serious, but the fascinating gameplay with puzzle elements proves the opposite very quickly. Create planes, launch them on the line, combine new, improved models, win prizes and more. It is better to let the money received for transportation go straight to the company’s development, unlocking the opportunities and expanding the fleet of vehicles, which will improve the situation by an order of magnitude.

Merge Plane – Click & Idle Tycoon is a colourful timekeeper with a huge variety of aircraft, exciting mechanics and easy operation.

The main actions in the game will take place on the ring track, however, instead of the usual cars or motorcycles, you will be watching sports planes. At the location there is a start and finish, which will allow you to control the amount of coins earned by the aircraft. In other words, your wallet will depend on the number of completed laps and it is desirable to pump the planes in time.

Aircraft will be located in the center of the game location. Some are placed inside cardboard boxes, while others can be purchased for in-game currency and then sent to the track. The main feature of the arcade is the ability to combine the same types of aircraft. This will allow you to get a new type of aircraft with improved characteristics and a large amount of income they bring.

You simply need to improve your planes, spend your accumulated resources on purchasing new aircraft and earn coins. Gradually, you will see how the number of coins earned per second begins to increase, the number of planes will become more and more, and their variety will increase significantly, then you can move to a new location. They are enough in the game to spend several hours of fun unforgettable gameplay.