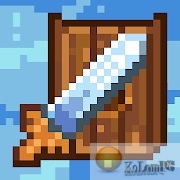 Knightfall is an android RPG adventure where you will find yourself in a pixel world. Take control of a brave knight and lead him through numerous battles with monsters and bosses. Embark on a journey through a dangerous and varied world of play that is filled with skulls, enemies, gold, battles and rewards. Touch the screen at the right moment and attack the enemies that get in the way. Pass all the trials of the game and pump your hero, but be aware that the monsters and your opponents will also grow and become stronger. Explore dangerous valleys and deadly dungeons and look for upgrades and weapons.
The gamers will smash them, trying not to put themselves under attack, collect trophies, get gold as a reward, as well as use all accumulated for the benefit of future operations. Improved armor, sharper weapons, and stronger and more skilled hands will help to cope with the incoming reinforcements of the enemy and successfully complete their difficult mission.