Guns of Boom is a cool first-person network shooter with great graphics, traditional for the genre dynamic gameplay, as well as the fact that the developers are constantly developing the project, adding to it not only weapons and maps, but also new features. So, for example, the augmented reality mode will allow you to observe what is happening at the location conveniently placing it on a flat surface of the real plane. Regular events will not get bored even with the “old”, the system of character development helps to create a “Rambo” from it, and a pleasant picture to the eye allows you to enjoy the gameplay to the maximum. 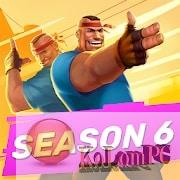 Guns of Boom is a multiplayer team shooter with colorful 3D graphics, a rich arsenal of weapons and more than 25 different locations. The game will begin with a training session, where the player is shown how to move around, how to switch between weapons, and what goals are set in each of the modes. The most common mode is the rating bout, where players are divided into two teams and try to score more points than their opponents.

Regardless of where the battles are fought, the goal is always the same – to make more francs than the enemy team. To do this, you will have a Kalashnikov machine gun, a simple shotgun, grenades and a simple knife. Move around, find enemies, and aim at them to do more damage and earn cherished points. It is better to use the machine over long distances, and the shotgun perfectly realizes itself close, grenades can be used to kill enemies who hide behind boxes and are not going out. You see that you have little health left – use the first-aid kit, they are not infinite, but they can help you in difficult times.

Victories bring you game currency in the form of special coins and bucks, and also allow you to increase your current rating. The latter affects not only the transition to a new league, but also the opening / pumping of weapons. Physics in the game is far from ideal, but graphics, animation and sound effects at the highest level.