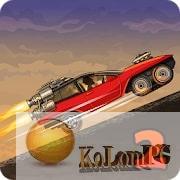 Earn to Die 2 is a sequel to the famous Earn to Die game. Take a ride on a real zombie apocalypse. The whole country is filled with zombies! Your main and only task is to get to the rescue ship alive, which is on the other side of the country. The only thing that stands in your way: the cities captured by zombies. And only an old pile-up, which is already falling apart in parts and not much money in your pocket. In Earn to Die 2 implemented a completely new mode of history, five times longer than the previous version. The game starts in the usual desert, but then leads you through the cities infected with zombies.

The world has plunged into darkness, bloodthirsty monsters roam the streets, and those who survived the nuclear explosions have been forced to survive by all available means. The radio reported that the military had set up a base where zombies couldn’t reach, so that’s where the main character of the game is going to go, armed with powerful guns and a fast car.

The game mechanics and control remained at the same level. On the left side of the screen you will find buttons to tilt the car during the flight, and the right side of the pair of buttons responsible for gas and brake. You’ll still have to drive long distances, destroying walking dead people and collecting coins, cartridges and gasoline along the way.

Upon returning to the garage you need to spend the money collected to improve the car. First you need to pump the capacity of the tank, then the engine, controllability, and set the nitrous oxide to set the maximum speed. Don’t forget about the choice of weapons, which are so many in the game. In general, the continuation of the game was successful, changed a little physics, graphics, added new locations, cars and nice chips.

BRAND NEW STORY MODE
Earn to Die 2 introduces a massive new Story Mode, five times longer than its predecessor. The game departs its familiar desert setting and delves into the depths of cities infested by zombies.

MULTI-TIERED LEVELS:
Levels are now multi-tiered! Drive across decayed highway overpasses, via underground tunnels, or smash through epic zombie filled factories. Whichever path you choose to take, you won’t be able to escape the zombie hordes – your only choice is to smash through them!

BUILD A ZOMBIE-SLAUGHTERING MACHINE
Unlock and upgrade 10 different vehicles, including a sports car, a fire truck, and even an ice-cream van. Each vehicle can be equipped with a range of upgrades, such as armored frames, roof-mounted guns, boosters and more. Those zombies will stand no chance.

DESTRUCTIBLE VEHICLES
Vehicles are now fully destructible. Hang on for your life as your vehicle gets smashed to smithereens if you aren’t too careful.

MORE ZOMBIES. MORE DESTRUCTION. MORE MAYHEM.
What are you waiting for? That rescue ship isn’t going to wait forever! Prepare yourself for a wild ride – and seriously, there is nothing like smashing through zombie-filled factories!