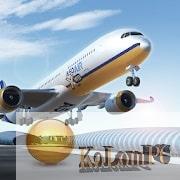 Airline Commander – A real flight experience is an android simulator where you will be running a huge airline. Create your own airline and use numerous aircraft to fly between cities and countries. Make money by signing contracts, performing takeoffs and landings as well as performing various missions in flight and landing at other airports. Open up new routes and conquer the vast expanses of the sky. Learn how to fly an airplane and how to solve various problems and accidents. Develop and expand your airline and increase your revenue and try to create the best and most reliable company in the world.
Players will be able to experience the characteristics of a large number of models of equipment of various types and purposes. Realistic ship management and behavior, various emergency situations, a variety of airports and conditions, as well as many more make this game one of the best in its segment for mobile platforms.