You can Download WWE Champions from our site for free 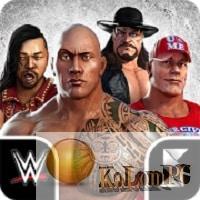 WWE: Champions – wrestling, combining a game of the genre of “three in a row.” Create and customize a team of famous fighters of both the old school and the new favorites of the public. Among them are such personalities as: The Rock, Undertaker, Macho Man Randy Savage, John Cena, Triple H, Big Show, Andre The Giant and others. A unique combat system in combination with a puzzle will appeal to many. As the game progresses, you can unlock new hits that you can in new battles. Fight as often as possible, get experience for battles and various rewards for excellent victories.

WWE Champions is a puzzle game with RPG elements that combines the three-in-a-row genre with a real man’s sport – wrestling.

The game includes not only three-in-a-row puzzles, but also character upgrades, hiring new fighters and strategy elements. The action of the game will unfold on the special ring, and you will never know in advance who your opponent is and what his strong/weak sides are.

In order to make your fighter to hit or perform a certain move, you need to collect the combination of three or more similarly colored elements on the playing field. On top of that, each successful removal of tokens will allow you to charge up cards with skills, which in turn deal devastating damage to the enemy. Naturally, your opponents won’t stand by and watch you beat them up. The gameplay is in turn-based format, which means that every time you need to squeeze the maximum out of your turn and not to be under the powerful attacks of your opponent.

Controls and mechanics are pretty standard for puzzle games of this genre. With swipes you will swap elements and collect chains. Wins bring you experience points, increasing the level of the fighter, as well as bucks, which will go on pumping protagonist and discover new wrestlers.

WWE Role Playing Game
Use RPG skills to earn XP by fighting in the ring and upgrading your WWE champions to increase their power and customize epic fighting RPG moves.
Fighting RPG gameplay lets you combine a variety of skills and upgrades to create a completely unique team to defeat your opponents.

BATTLE in 1-on-1 or Tag Team Online Games
Match 3 puzzle pieces to attack, build up energy and even pin your enemies using signature WWE moves.
Battle skillfully to unleash devastation on your rivals in epic battles that you can finish in less than five minutes.
Online team-ups with friends – tag team against rivals or battle against your friends for ultimate bragging rights.

CREATE the Ultimate Alliance
Form a super team with your friends to take over the WWE Universe!
Heal each other’s injured Superstars and give gifts to your teammates as you fight for dominance in and out of the ring!

STRATEGIZE with your alliance members in the Faction Headquarters
Players can coordinate to complete exclusive Expedition missions for rewards, earn faction lockboxes in the Head Office, and earn Faction coins that can be redeemed for valuable items in the Swag Store.