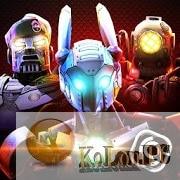 World Robot Boxing 2 is a long-awaited sequel to the excellent action dash of fighting, which in turn was created in the setting of the popular fantastic film about the near future. Mankind has completely abandoned the boxers of people, replacing them with robots controlled by operators. Which made this kind of competition incredibly popular around the world. New, more beautiful graphics, quality animation of movements and strikes, the system of upgrades of each model available for purchase, storyline, dangerous opponents and much more makes this game mandatory for all fans of the original project.

World Robot Boxing 2 – continuation of the famous fighting game, where instead of people fighting robots.

The game’s gameplay has not changed much. You still have to choose a robot fighter, then, go to the ring and try to defeat your opponent. The characters, as before, attack only with their hands, so we got more boxing than a full fighting game.

Players will have about 15 robots at their disposal with the ability to upgrade and customize them, the benefit of skins and various jewelry is really a lot. The game is divided into several dozens of levels and each of us will have to fight with strong robots. If you win, you get a pleasant reward in the form of game currency, new skins or containers.

As the control is used virtual joystick and a few buttons. As before, you need to make quick and whiplash blows, put a block, dodge opponents’ attacks and conduct counterattacks. When your enemy is in a dying state, the game will change its angle and you will need to click on the marked areas very quickly. Like in the first part of the game looks quite interesting, the robot models are perfectly drawn, the animation is great, and the number of combinations and hits can’t help but gladden.