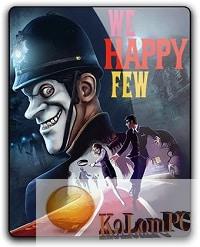 Britain in the 1960s was already a strange country, just remember The Beatles and The Rolling Stones, and in the game We Happy Few it is just ultra strange. There is nothing to be surprised about, because this adventure project was taken by Canadian Compulsion Games studio, that created the noir, that is dark Contrast game. There is much more light and laughter in We Happy Few. But… (Laughs)

In general, in the story, all residents must be as positive as possible. It doesn’t work out naturally – wear a mask and accept what means. However, this too cheerful atmosphere is not for everyone in spirit. The hero of the game just like that – dissenting. He has to get out of town without causing suspicion! Help him and PC owners, and holders of the most fashionable consoles. But when we will be able to download We Happy Few via torrent, we don’t know yet, so let’s say hopefully positive – soon!