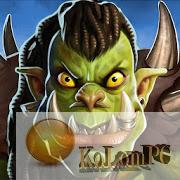 Warlords of Aternum is a beautiful and interesting turn-based strategy with hexagons, highly detailed graphics, and a fantasy story. Gamers will enter into a confrontation in a very difficult time for their race. Enemies on all sides press the army, capturing one city after another and leaving less and less chance for revenge. Players will lead a handful of militiamen in defense of their homeland and gradually transform them into an elite unit (and then a full-fledged army) that will play a crucial role in the final battle. The gameplay is engaging and the tactical side will appeal to all lovers of alternate actions.

Warlords of Aternum is a turn-based tactical strategy with puzzle elements.

The game’s plot will send us to a world called Aternum. For a long time it has been attacked by orcs, and people were looking for a hero who could stop the endless bloodshed. Naturally, that hero will have to be you. You will have to travel a lot from one region to another and deal with small groups of enemies. Liberating territories will not only allow you to return to them at any time, but also open up access to new characters.

The battles in the game are interesting, though monotonous. Before the battle, you’ll see what enemies are waiting for you and what you can get if you win. The location of the battle is made in the form of hexagonal tiles. The first thing you’ll have to do is to place your army, and only afterwards take decisions that will influence the result of the combat. Don’t forget to take advantage of some advantages: attacking from a hill allows you to get an extra 50% attack; being in the forest, your character will receive 50% less damage; the swamp slows down the squad and makes your characters more vulnerable; the village will give you some extra points at the beginning of the next turn. Use these advantages wisely, and you’ll find it much easier to defeat your enemies.

You don’t have to build anything in the strategy, so all attention is paid to character progression. You will be able to improve such stats as: attack, critical hit chance, range, health reserve, number of steps taken and more. The game is interesting, the battles will not let you get bored, and nice drawn graphics will allow you to fully immerse yourself in this mysterious world.

OIN THE FIGHT
Take on the orc horde, roaming bandits and fellow warlords in intense turn-based PvE or PvP battles

YOUR MOVE, YOUR VICTORY
Make the right tactical decisions to dominate intense 3D animated combat on the hexagonal battlefield