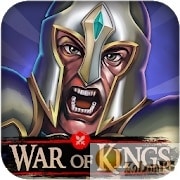 War of Kings – classic-oldschool kind of strategy that supports both solo mode and multiplayer confrontation with real opponents. The project has a mechanics in the spirit of the legendary representatives of the genre in isometry. Mining resources, construction of buildings, defensive points, walls, hiring units, and after the natural clashes waiting for all those who dare to immerse themselves in the gameplay. It is necessary to take into account a lot of features to always be ahead of the competition and respond to all threats in a timely manner. Which there are more than enough. Well, beautiful graphics and a variety of elements, features and objects also leave only the most positive impressions.

War of Kings: Epic Strategy PvP – a fascinating strategy with a view from above, where you will find dynamic battles in real time and a huge selection of unique characters / weapons.

Players will face a very important question in gathering warriors and finding allies, which will help in numerous battles and capture new lands, resources and more. Confront you will be barbarians and other enemies that are armed with sharp swords, spears, axes and other equally dangerous weapons.

The game will begin with training. Your castle will be attacked by barbarians, you will take command of a small army and send them to a bloody battle. You can use one finger to select the warriors you are interested in and then specify where they are to go. Battles take place in automatic format, the player can not affect the outcome of the battle. Naturally, without a strategy will be difficult to win, so for each battle to think about who and where to place, for example, the first riders, for them the knights with swords, and after – the archers.

The game boasts not only a fascinating gameplay, but also battles in real time, pleasant colorful graphics and convenient management. Fans of strategies, where decides the tactics and ability to wisely spend resources the game will certainly like.

Multiplayer “Online Play Mode” :
You can start looking for opponents from around the world and fight them with Friends and win loot and gems to develop civilization kingdoms,

Without Internet “Offline Play Mode”:
Don’t have an Internet connection?! Do not worry you can play continuously with enemies without the need to connect to the Internet.

Easy control:
Easy control and there are dozens of tools to easily control soldiers and move them anywhere, clash kingdom try to discover it!

Many options to develop your clan:
We believe that everyone has their own strategy so dozens of features and tools are provided that make your clan developed and powerful to defeat enemies.

Use your intelligence:
In the “War of Kings” game intelligence is the key to winning, so you have to devise your own strategies effective and powerful to overcome your opponents.

Multiple avatars:
You can choose your RPG avatar to be the symbol of your clan.

Clan Development
When you start the battle with the opponent there is a building called “Academy” from which you can develop the capabilities of your soldiers and increase your resources to make the clan large and powerful ,battle kingdoms.

Many resources:
You have to make the workers work to collect resources for the survival of the citizens. There are resources of wood, stone, gold and wheat, so you must keep your resources at parity.

Soundtracks:
War of Kings possesses many wonderful music that makes you in constant thinking to develop your clan to be the strongest!

Small size and little use of Internet data:
Don’t worry about losing your internet data, we have succeeded in making Kings War game one of the best games that use very little internet data and also the size of the game on your phone.