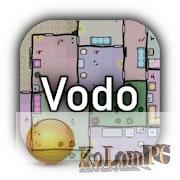 Vodobanka Pro is a cute drawing strategy in which the players will be leading a special forces team that will storm the various rooms. There is a lot of unpleasant things waiting for them inside. Armed to the teeth opponents, complex construction of rooms and objects in them, as well as many other things that are designed to delay, as well as complicate the actions of uninvited guests. So you will have to take all this into account, to conduct reconnaissance, to use special gadgets and grenades, to think over every step and, even in the most thoughtful version, to take risks. After all, you never know how the situation will turn out and what will get into the heads of people whose soul and the assault group was called.

Vodobanka is an unusual strategy with a view from above, where you will learn all the details of SWAT team work.

You will be in charge of a small SWAT team, which performs a wide range of tasks, from storming buildings to the release of hostages. Players will see their wards with a view from above, however, the mechanics or interest does not suffer from this. Each of the fighters has a rifle, however, they will use them very rarely, the strategy is tactical.

Terrorists and other armed characters are marked in red, hostages and civilians – green. The main thing is not to confuse and accidentally not to give the wrong team. Special forces will independently move around different rooms, search them and perform their tasks, and you, in fact, need to set the right priorities and make no mistakes. The complexity of the levels increases evenly, at first you will have to arrest only a few criminals, and after acting more thoughtfully and make tactically correct decisions.

Often, rooms are filled with armed terrorists and it will not be possible to just walk into them. You need to use smoke bombs or light grenades, which will give you a chance to quietly get inside and disarm your enemies. All the other things you need to pay attention to additional rooms that lead to other rooms, such as the roof or the back door. By installing a blocker on all external doors, you eliminate the possibility of terrorists escaping, which also affects the level of passing and the final score. The game has a very simple design, but the gameplay, the number of levels, complexity and interest write off all the disadvantages.

How to use the APK file to install Vodobanka Pro: