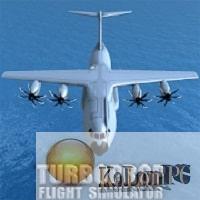 Turboprop Flight Simulator 3D – operate a military transport aircraft and complete missions. In this android simulator, you will act as a military aircraft pilot who needs to fly in a variety of weather conditions, monitor instrumentation and deal with emergency situations on board. Perform all tasks and lift the multi-ton aircraft into the sky, taking off and landing in different airfields. Perform training missions, which are presented in the game 21 and training tasks. Fly at any time of day and deliver the required cargo on time.