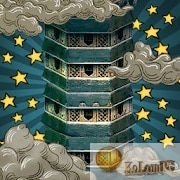 Triglav – role-playing game that originally came out as a web version a few years ago. The game world is a tower consisting of more than 50 floors, each of which you have to solve a series of puzzles to pass above, on the top floor you will meet with a prisoner there Princess. You will play the role of a character hero, whose character you will create from more than 2500 types and elements. The game world is also a richly detailed structure with hundreds of different elements.
A huge original world, more precisely a tower with many floors, levels, transitions and everything else that makes it a full city. At its top is a prison where a princess is imprisoned. That’s what she needs to be saved by the brave protagonist who, having gained courage, entered the gates of the first floor. Ahead of him are waiting for the battle, trials, traps, secrets, unique weapons and everything else that creates such a fascination.