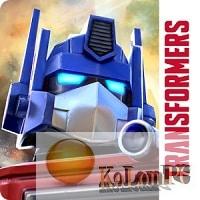 Transformers: Earth Wars is an MMO strategy for mobile platforms in the Setting of Transformers robots. Gamers are offered two sides of the fraction. One side will defend the planet Earth, the other will try to enslave. And both will face in an irreconcilable battle. According to the tradition of the genre players will build a base, develop infrastructure, conduct research, collect new models of soldiers, create an army and do not forget about the defense of everything that was gained through hard work. Team up in alliances and work together to counteract the forces of your opponents for the future of this planet and humanity.

Whose side are you on? Gather your team of strong transformers, including calendar Optimus Prime, Megatron, Bumblebee, Grimlock, Soundwave, Starscream and others. Playing for Decepticons or Allied Autobots is up to you. At your disposal is given a small base, which will become your fortress. Design and repair transformers and defeat your sworn enemy as quickly as possible.