You can Download Top War: Battle Game from our site for free 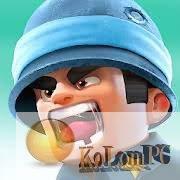 Top War: Battle Game – an original blend of mechanics inherent in the usual strategies for mobile platforms, as well as projects where combining is the main action in certain settings. In this case, players will combine the same squads of units just before the start of the battle. Understanding the opponent’s defense will allow you to choose the appropriate degree of development, after throwing the result in the battle. In addition there is also pumping your base, research, as well as much and much more, which will not get bored. Well, and the futuristic setting and nice graphics also leave only the most positive impression.

At your disposal will be a small military base, located in the middle of a huge island. Around you will be thousands of other players, gradually expanding their own possessions and increasing combat power.

As with any strategy of this format, players need to be engaged in the construction of new buildings, mining resources, training soldiers and participating in battles. There is nothing unusual in this plan, there are workers who are engaged in gathering resources, they also build buildings, improve them and explore new territories. Soldiers and military equipment, play quite an important role. Units differ both in type and armament, and it is possible to combine a group of similar soldiers to get an upgraded unit with improved characteristics.

The most interesting part is the battles. They are divided into two parts. First, we need to choose the units, place them on the playing field, if possible improve, and then specify the place of landing and wait for the end of the battle. Victories bring game currency in the form of crystals, coins and resources, spend them wisely and then, your enemies won’t stand a chance.

You will have to become the commander of a small army, develop your own settlement and take part in bloody battles against real players. At first you will have a small settlement with the main building, as well as several auxiliary buildings where soldiers train and station themselves, extract and store resources, learn and use new technologies.

The first thing to do is to build mines that will bring you gold. You need the money to train new soldiers, equip them with cool guns and don’t forget about military equipment. Planes, tanks, helicopters, boats and ships, anti-aircraft guns and more. The most interesting thing is the possibility of combining not only buildings, but also soldiers, military equipment, which allows you to get the building, units or machines of higher level you need. The higher the level of buildings, the more gold they bring, opening up access to new types of units and other things.

Before the start of the battle you need to gather an army to go into battle, you need to unite identical characters to the highest possible level, and then send them to the battlefield. At the time of the battle, the characters themselves fight each other, you just have to wait for the end of the battle. If successful, you get gold and experience points, which will go to upgrade the settlement and units.

How to use the APK file to install Top War