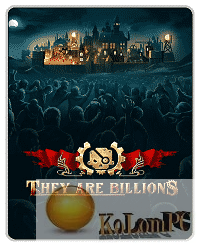 They Are Billions is a strategic game. You have to build and fight on a foreign planet. It’s all designed in the style of steampunk. Build all kinds of structures and try to survive against hordes of infected. You are waiting for almost five dozen missions, exciting and varied. Lead the colonisation on the orders of the Emperor. You must occupy an area devastated by the Infected.

There are billions of them, they are bloodthirsty and difficult to contain. There are several game modes that can demonstrate different aspects of the gameplay. Survival means being in a randomly generated world where you have to fight the infected. With a pause, you don’t have to waste much of your nerves here, just stop the time to think about what to do next and make a better decision.

1000000000 combinations, enemies and solutions. You will have to create a powerful colony that can resist the onslaught of numerous enemies. The difficulty is that if at least one infected person enters the building, the infection will spread to all areas. All enemies listen attentively and sniff, neatly. Everyone is controlled by AI separately, do not think that the task is simple.