You can Download The Walking Zombie 2: Zombie shooter for free 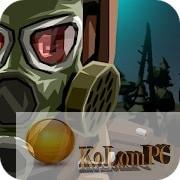 The Walking Zombie 2: Zombie shooter is a sequel to the excellent low-polygon action game in which players get a new character. He was born in the world after the zombie apocalypse and did not know the usual way of life. But he has an innate immunity to the virus. Even after being bitten, he remains a normal human being. This makes him the perfect scout and operative for the most dangerous missions away from the enclave bases. Players will help him pass all the tests, close side quests, find answers about his origins and just have a great time in the ruins of the old world.

The Walking Zombie 2: Zombie shooter is the second installment of the popular zombie survival shooter, now with low-polygon graphics and new missions.

You play as a character who was born in the world of the zombie apocalypse, a dark and frightening place. Now you have to fight for survival, fighting zombies, mutants, monsters and marauders.

As it is supposed to be, we are waiting for dynamic first-person shooter, where there is a lot of quests, cool firearms and wild shootings. The main goal of the game is zombies, that slowly take over every corner of the world. They will be everywhere, their number is increasing by the minute and only a bullet to the forehead can stop them. Use pistols, machine guns, shotguns, sniper rifles, ammo of different calibers and grenades. Do not forget to use first aid kits and replenish your character’s health in time. Keep away from monsters, aim and shoot straight at the head.

It is interesting, that the plot will evolve depending on your actions, be they good or bad. In addition to the main plot, the game has many additional missions, each of which will please you with its unique task and nice rewards. Do your best to stop the spread of the virus, help those in need and deal with bloodthirsty creatures.