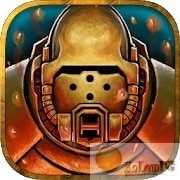 Templar Battleforce RPG is a turn-based strategy game for Android, with RPG elements where you find yourself in a futuristic world full of terrible enemies and outcasts. In this game you have to assemble your team of Templars and direct their forces to fight enemies. Develop your battle strategy and explore vast territories, fighting against bosses. Go through more than 45 levels and travel along the long corridors of the military base, the desert and try to enter the deep rear of the enemy. Create your own unique Templar, endowing him with arrows, grenades, a flamethrower, as well as various skills and abilities.