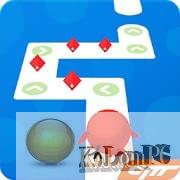 Tap Tap Dash – An addictive game where you have to manage funny characters. Our hero moves along a narrow winding path, which is interrupted from time to time. Your task will be, using your reaction to help him overcome a dangerous path and at the right moment to jump to another section of the road. With each new level the difficulty of the game will increase and you can never be wrong, otherwise your hero will fall into the abyss. Proceed on different tracks and open new heroes. The game has more than 250 levels, many heroes and trails. Enjoy simple controls and climb up the leaderboard.
Characters will move forward along the tracks while collecting crystals and bonuses. And all that’s left for gamers to do is dig in time for turns and jumps over a precipice. Trouble is, the camera may not be static. Constantly changing angles and tracking a moving object can spin anyone’s head around. And then it’s difficult to react in time to the danger. But practice will provide a good response, and as a result, perfect passage.