You can Download Tap Defenders from our site for free 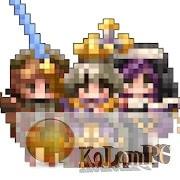 Tap Defenders is an addictive RPG to the android, where you will engage in an epic battle with monsters. Build your invincible team of heroes and upgrade them as you play, trying to defeat the monsters any way you can. Consider the strengths and weaknesses of your warriors and equip them with powerful weapons and armour. Explore gloomy dungeons, forests and other locations and acquire spiritual stones that will enhance your warriors. Build your invincible clan with other users and fight back against the forces of evil.
Pixel graphics, fantasy world, the presence of magic and other ways to destroy vast territories and the divine ability of players to trample anyone who takes the chance to attack make the gameplay quite peculiar and exciting. Well, the acquisition of the so-called Sacred Stones for trophy sums will significantly pump up skills and other attributes that help in combat.