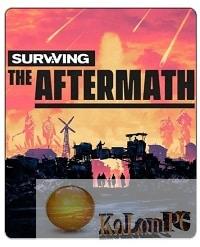 Surviving the Aftermath invites you to try your hand at surviving under really harsh conditions. It’s difficult, and it makes it even more interesting. In this world, after a global disaster, resources and capabilities are limited. However, with due diligence and diligence, much can be achieved. You will face the important task of creating a new civilization. Here you can establish a settlement and engage in its development. It will not be reminiscent of paradise, every piece of land, every piece of resource must be conquered.

During the passage you will need to overcome a lot of difficulties. These are not only quite natural factors, such as bad weather, natural phenomena. Gangs of looters may come to visit you. Try to interact with other settlements, make connections, for mutual benefit. This is a new part of the series, in the previous one, the authors suggested that we try to survive on Mars.

Visually, the project looks dignified. With the help of various leaveers it was possible to create the necessary atmosphere and provide players with all the necessary control levers and rich tools. The game will appeal to all fans of urban planning simulations, especially fans of the harsh gameplay.