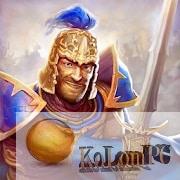 SpellForce is a series of video games whose gameplay combines elements of strategy with turn-based battles and role-playing games. And now the owners of mobile devices have the opportunity to touch the classics, the project is called SpellForce: Heroes & Magic. Your main task in this game will be to build a huge empire, which you will create on the global map, but all battles will take place step by step in separate locations. In addition to the storyline company, you will be able to test your strength in battle to the death. Excellent graphics and detailed units, as well as support for the Russian language will allow you to enjoy this masterpiece.

CRAFT YOUR FANTASY EMPIRE
Creating an own kingdom turn by turn is the main goal in the 13-mission long adventure mode or the free game, where you are facing your AI-opponents on randomly generated maps. Choose between the Dark Elves, the Orcs or Humans as playable races and ally or fight six neutral factions. Send your troops to conquer cities, to claim mines or farms and to search treasury.

EXPLORE NEW LANDS
Your race’s hero will lead your army on their search for glory, treasures and valuable ressources to exploit. Because your ever-expanding empire needs them to prosper. When you find new cities, you can muster new unique units to command in any battle that lies ahead.

BATTLE YOUR ENEMIES
While your heroes explore the realms, you will meet your opponents on the battlefield and will exterminate them in simultaneously turn-based combats. Played out on hexagons, you’ll send Archers, Catapults, Knights or Dark Elf Necromancers against beasts & enemies like Spiders, Shadow Nightmares or Barbarian Berserkers. While you plan your actions, so does your enemy. When you both execute your plans, you’ll see who’s the better general.

EVOLVE YOUR FIGHTERS
SpellForce: Heroes & Magic is also an Role Playing Game. Your hero and your soldiers both gain experience and they both can find magical items like swords, armor or other equipment. When you level up, you can learn new skills and of course seasoned warriors are more valuable on the battlefields than fresh recruits.