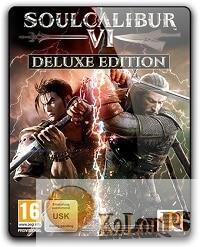 The legendary series of fighting games in the setting of the universe Soul entered the arcade machines in the distant 1998 and still has a huge fan base around the world. Chasing a mystical sword stretched out for years, there were many crossovers and guest characters that fit perfectly into the realities of the world. New game brings us back to the storm of ongoing battles for the right to be the best in his skill.

SoulCalibur VI – another chapter of the cult fighting game, where the boundaries of the worlds again thinned out and let into the ground as brave heroes and villains that are hunting for mystical artifacts. In single-player mode you will be able to return to the past and find out where the endless chase began, and new combat mechanics will open up unlimited opportunities in tactical building.

Bright mystical gates of SoulCalibur fighting game reopen before the brave ones who decide to fight for their own souls and magical artifacts that give divine powers. Become one of the fighters, meet new characters and welcome the old ones, write yourself into the history of the popular fighting game and win the first places in the competitive mode by entering your name in the list of champions.

Battle, earn points, open up new skins and take part in epic battles where your friends can both be on your side and join your opponents. Buy the game now and get ready for exciting combos, beautiful innovative graphics and Bandai Namco’s signature style.