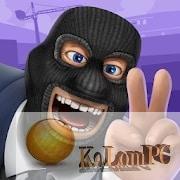 Snipers vs Thieves is a REAL-TIME multiplayer heist game! PROTECT your stash as a deadly Sniper or LOOT your rivals as a gang of filthy Thieves! Create and upgrade a deck of EPIC GADGETS ranging from big-head ammo, freeze bullets to the ever-reliable invisibility cloak. Play in SEASONS to earn stars and REWARDS as you work your way up the ranks. Earn game changing MASKS such as the Gorilla King, Frankenstein and even U.S. Presidents past and present!

Snipers vs Thieves is a multiplayer arcade action game in which you can become either a thief or a sniper, competing against other players from around the world.

You can play with a random set of players, or with your friends by choosing the role of sniper or thief. The gameplay varies depending on the role you choose, so it is worth trying each side.

The thief will have to escape from the crime scene, trying to take away as much money as possible, and the sniper, in his turn, should not allow this. Playing as a thief you have to look for cover, hide behind them and quickly run from one fence to another. Don’t forget that the moment when the character comes out from behind the cover he becomes an easy target, so zigzag. You will also have a huge set of items that you can use to hide from the eyes of snipers and successfully get to the shelter.

Playing as a sniper, all controls take on a new meaning, you need to hit enemies from the first person view, trying to make a couple three accurate shots. The proceeds will go to purchase new weapons, power-ups and funny skins, of which there is a huge variety in the game.

PLAY AS A SNIPER!
Protect your vault in real-time from rival bankers! Take them out before they get to the getaway van!

LOOT AS A GANG OF THIEVES!
Team up with Thieves across the world or buddy up with your friends and take on rival gangs!

UPGRADE OVER 50 DIFFERENT WEAPONS AND GADGETS!
Blow your rivals away with explosive ammo or ice the competition with freeze bullets!
Disguise yourself as a car or perhaps even a tree to slip away with all the loot!

JOIN A CLAN WITH FRIENDS!
How much loot can you take in a weekend? Co-ordinate your clan to maximise your returns!

SEASONS AND COMMUNITY!
Seasons and events filled with new content and surprises!
Climb your way to the elite leaderboards and prove your worth against the best in the business.

DELVE INTO THE BLACK MARKET!
Hundreds of weapons and gadgets flow through the black market every day – keep an eye out for rare items!