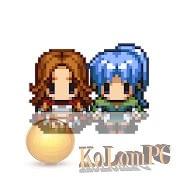 RPG Knight Bewitched – adventure game on Android, where you will control the brave heroes and watch their adventures. In the story of the game after the murder of the dragon Tifa, the fearless knight Gwen and his companion are assigned to hunt the witch Gwendolyn. Under unexpected circumstances, Ruth falls ill with a strange disease and, after recovery, it turns out that the witch who was assigned to kill was infused into her. Unable to kill the woman who saved her life, Ruth was imprisoned on suspicion of witchcraft. After a brief conclusion, Ruth was released by her comrades. When a new threat arose over the horizon, Ruth and Gwen, along with a young orphaned companion fraudster Uno, embarked on a dangerous journey. Reveal the secret of whether this is true love or Ruth is bewitched.