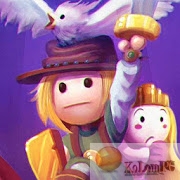 Reventure is a great adventure project, which will surely please everyone who wants to enjoy really what can be called a game. Gamers get the old-school pixel graphics, interesting storyline, gameplay with a huge number of final variants, gradual development of the player and accumulation of knowledge about the world, where the main character lives (secrets, traps, betrayals, unexpected turns – all this will allow to go further and get more and more), tons of humor, fascinating battles and achievements, as well as many other things that won’t leave them indifferent to Reventure.

Reventure is a platformer with pixel graphics, that will not leave you indifferent.

The main feature of this project is one location, but it is so huge that not all players will be able to visit every part of it. The plot of the game tells us about the royal daughter, who was kidnapped by the dark magician and now, the main character will go in search of her.

The whole problem is that the hero is not immortal, but he really wants to look into every part of the huge world and find out what awaits him there. Yes, the ultimate goal of the game is to find and save the princess, but who needs it. It is much more interesting to wander around the spacious locations, to climb up the platforms, to dig the ground, to find the hiding places and to fight with unknown monsters in the dark dungeons.

Depending on what items, weapons and armor will be in the inventory of the main character, he is able to become whoever you want. Archer, knight, adventurer, fisherman, dragon hunter or avid explorer. Pick up a sword, shovel, magic rings and runes can be on the expanses of the location. The more items in the ward’s backpack, the slower it moves, much lower jumps and becomes more vulnerable to enemy attacks. Do not stop, constantly on the move, looking for adventure, enemies and do not forget about hidden messages and stashes left by the developer.

Lots of “”Aha!”” moments
The world doesn’t change with each new game, you do.
Well, actually it DOES change, but that’s a secret for you to find out.

Bazillions of secrets and pop-culture references
They are, you know, secrets. So we won’t spoil them here

Magic
Even a simple-looking-yet-amazing game like this takes a lot of time and big piles of money to make, but you can get it for only a few bucks.
How’s that for magic?

Time travel, battle royale fights, mimics, permadeath, shotguns, mining, resource gathering, base building, global leaderboards, farming…
Ok, we may have had exaggerated on that one…
OR HAVE WE???

Humor
Yup, there’s that too.
Available in many flavours.