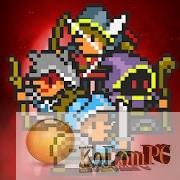 Quest ofDungeons is a pixel-based RPG that invites users to dungeons full of monsters and other opponents. The world is in darkness, thanks to the Dark Lord who stole the light and carried it to the underground catacombs. To return it, the player must choose one of the four characters and go there after the villain. On the way to the goal of the gamer waiting for numerous battles with monsters, as well as collecting the loot and buying the right items and weapons. Each location here is randomly generated, which further increases interest in the project.

By playing as either a Warrior, a Wizard, a Assassin or a Shaman you have to traverse dungeons, defeat enemies and loot everything you can in order to survive. You can learn new skills in Tomes you find along the way and buy/sell items at shops.
The entire game is procedural so you won’t find items/enemies in the same place each time you play.