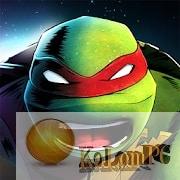 NinjaTurtles: Legends is a party-role project that offers an immersion in the legendary universe of ninja turtles, their friends and enemies. This time they have really cool problems. Crang has launched his most insidious plan, which involves creating his own mutant army. And for that, he needs DNA. And he’s declaring a hunt for anyone of value to him. It’s up to the gamers to intervene, get a squad of fighters, and then prevent all the items from happening. The final point is to move the Earth into dimension X as soon as possible.
You get to create a super team of real brave fighters from 30 characters of the game. And by collecting bonuses during the game, you constantly improve and strengthen your team! Battles take place on the rooftops of giant skyscrapers in New York City and the X dimension.