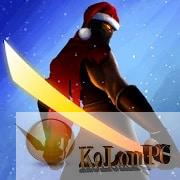 Ninja Raiden Revenge is a cool action platformer dash in which players will get the role of a ninja. Every hundred years, an ancient demon awakens, calls on his minions and begins a destructive journey. Collecting bloody tribute from civilians. So one day he unexpectedly came to the village at the ninja school. The protagonist who returned from the trip found his brothers and friends brutally murdered. He has no choice but to rush into a chase to get revenge. He is not as simple as he seems. A descendant of one of the gods, he has incredible powers that will help him to cope with all enemies and destroy the evil one.