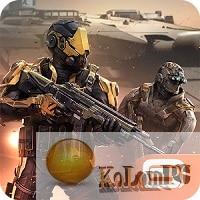 Step into the action as the latest installment in the best FPS series raises the bar for shooter games once more! Create a squad, add your friends and test your individual and team skills against other squads in dynamic multiplayer warfare!

Is single player your thing? Then step into a world on the brink of anarchy and shoot your way out of one dire situation after another to expose a lunatic who’s trying to tear the world to shreds.

CHOOSE YOUR FAVORITE CLASS
6 customizable classes that you can level up across single- and multiplayer
Find the playstyle that suits you: Assault, Heavy, Recon, Sniper, Support or Bounty Hunter
Activate class-specific skills by earning and spending Skill Points

HIGH-POWERED MULTIPLAYER
Epic team clashes in Squad vs. Squad matches
Talk to other players in Global and Squad Chat
Individual and Squad leaderboards
Win cool rewards in the limited-time events

HIGHLY CUSTOMIZABLE CONTROLS
Intuitive, highly customizable controls so you can play the game just the way you want