Minion Shooter – cool very beautiful arcade game with juicy graphics, simple but fascinating gameplay and a lot of interesting features in the gameplay. The game is about a heroic defender of the world’s last coffee plantation. And the thing is that the aliens have landed on the planet have not touched anything but the coffee trees. It’s an exquisite gastronomic treat for them, so it’s no surprise that they’re pretty eager to get to the last place. Well, gamers will be on the defensive against the brazen creatures. In this they will help the cannon shooting fruit. Shoot accurately, eliminate the main dangers, pump up the weapon and do not give up. 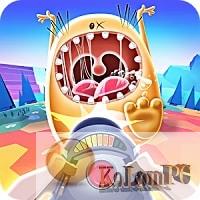 Minion Shooter is a colorful action arcade game in which you have the honor of defending the last coffee plantation on earth. Coffee is an endangered beverage, and the reason for this is annoying alien monsters that want to destroy the plantation and deprive people of this divine beverage.

You will use a machine gun as your main weapon, firing different fruits. Apples, cherries, pomegranate, lychee, coconut, bananas, pineapples and many other fruits will act as projectiles. Watch everything that happens you will be in first-person view. The character holds a gun in his hand, and you have to use one finger and joystick to aim and shoot at enemies who are coming from all sides. Don’t forget to switch between shells and attack the monsters first.

Of the destroyed alien creatures will drop coins, which can be spent to buy more fruit and improve the rate of fire of the gun, as well as to reduce its overheating during continuous firing. The graphics in the game are cartoonish, very bright, and the music and sounds fit perfectly into the gameplay and don’t let you get bored.