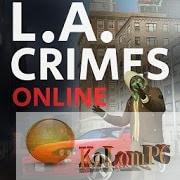 Los Angeles Crimes is a third party GTA action game under development and continues to grow and develop as developers are able. And it should be noted that they are very talented and skillful. In a relatively short time the gamers could get a quality clone of cult action, that doesn’t stop there. Guns, equipment, clothes, freedom of choice, huge open world, different game modes, cooperative opportunities and many other things will please and will delight all the fans of the original source who prefer mobile gadgets.

Los Angeles Crimes Online – multiplayer action with an open world and rich features that will not let you get bored. Start the game with a choice of character, each of which differs both externally and a set of other characteristics, including behavior and character. If you want, you can customize its appearance and go to a new world for yourself. You will not see the colorful Los Angeles, which is so used to in the movies. It is ruled by the mafia, weapons and endless fights with enemies.

The game has several basic modes: creating your own unique world and multiplayer mode, where you will meet other players. The first mode will be ideal for beginners. You will be able to get acquainted with the mechanics, understand all the subtleties and pass a couple of dozen missions. There is no training in action, you will have to figure out for yourself, at the same time remembering what kind of weapon and at what distance will be more effective in shootings.

In online mode, you need to move quickly on the map, find weapons and replenish ammunition, destroy enemies and earn money. There is no certain sense in this game. You just need to be the best, open all the locations, earn as much money as possible, buy all the cars and find new friends.