You can Download King Of Defense: Battle Frontier from our site for free 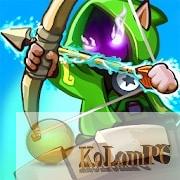 King Of Defense: BattleFrontier – an excellent strategy in the genre of tower defense on Android. In this game, the border of the kingdom was broken by monsters and now you have nothing to do but pick up weapons and call on brave heroes to protect the kingdom. Combine and combine different turrets and gradually improve your combat tactics. Pump your weapons and heroes and develop new battle tactics. Navigate through various locations such as the desert, jungle and snow-covered valleys.

King Of Defense: Battle Frontier is a beautifully drawn strategy game in the “castle defense” format with dozens of characters and a huge set of levels.

As is expected of games of this genre, the player will have to organize an impenetrable defense, using a number of characters and unique turrets. According to the storyline of the game you will be defending the walls of one of the major castles on which orcs, goblins, zombies, bats and demons from the underworld.

The gameplay is divided into dozens of levels, each of which must be fought off several waves of enemies. At your disposal will be a brave hero, armed with a sharp blade and shield. He attacks his own enemies and moves around the location. The main task of the player will be to install new defensive towers and upgrade them, which allows you to increase the radius and the damage inflicted. Each subsequent wave will be much stronger than the previous one, it is necessary to use tricks and do not forget about the magical abilities possessed by the wards. For example, fireballs, rain of arrows, freezing your opponents or poisonous smoke.

Between levels you have to go back to the main menu and level up the characters, open new towers and improve them in every way. The idea of the game can not be called new or original, but it is very well executed, especially in terms of graphics and variety of characters and buildings.