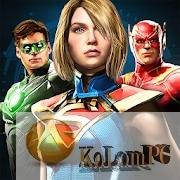 Injustice 2 – Justice will catch up with anyone who decides to challenge the heroes. It’s a continuation of the legendary first part of the game Injustice, and as all its millions of fans know, it will be just great. The developers made some changes to the combat system and other aspects of the game, but it was and still is the best fighting game. In the new part of the game, we have new heroes, new abilities, and a lot of improved old heroes and villains! Even more awesome graphics and battles against real players, all this will make your heart beat more often.

The player in most cases will have to control the Batman, the rest of the characters will be as assistants and appear only in the most necessary game moments. Several modes have been added to the game, including campaigns and battles against real players, where no one will feel sorry for you.

Each of the modes will appear as you go through the main storyline. It is very interesting, with a lot of videos, meetings with your favorite characters and first-person stories. It turns out that you are watching a cartoon and in addition can affect the outcome of the upcoming battle. As in the first part, the mechanics, battles and physics have remained the same. With the same control, gestures and clicks on the screen at the right time can strike, use special techniques and block enemy attacks.

If the battle is successful, you can get some coins, and if you’re lucky, you can get some crystals. You can spend your wealth on trunks with new character cards, their pumping and opening of new storyline chapters. Externally, fighting game looks just great, animation, effects, drawing characters, and musical effects have not failed. If you are a fan of comics and in particular like DC, then you will definitely like the game.

EVERY BATTLE DEFINES YOU
Injustice 2 offers you more ways to build, level up, and progress your roster of iconic DC characters. Upgrade with a Combination Level and Star Rating system by collecting characters and unique gear. The Gear System provides new looks for your character, as well as bonuses to your health, abilities and strength.

EPIC, CINEMATIC STORYLINE
Injustice 2 continues the story set in motion in Injustice: Gods Among Us. Set in the future, Batman and his allies work towards putting the pieces of society back together but struggle against those who would restore Superman’s Regime. In the midst of this chaos, a new threat appears that will put Earth’s very existence at risk.