Idle Hero TD – Fantasy Tower Defense – a fresh project from Iron Horse Games in which players will find low-polygon graphics and classic tower defense, but only in endless mode. They will traditionally start placing a variety of properties and characteristics of the units on the strategically important points. So that they in turn most productively mowed down enemies moving along the roads. Wins bring resources and trophies. And this will allow for planned upgrades and improvements, as well as unlock new recruits ready to immediately engage in battle with the growing pressure of the enemy. 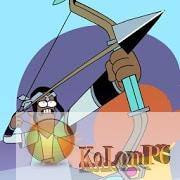 Idle Hero TD – Fantasy Tower Defense – a defensive strategy format, where you must assemble an army of brave warriors and protect the royal walls of the hordes of enemies. Epic confrontations, pixelated stylization of locations and endless waves of monsters await you.

The gameplay is eerily simple and interesting at the same time. Throughout the game you must assemble and upgrade your squad of warriors, spending the gold and crystals you have earned on them. Characters are located in certain parts of the playing field and can be replaced if a stronger hero. They independently attack enemies the moment the latter are in their line of sight.

The number of waves is unlimited, the opponents attack indefinitely until they destroy the object the player is defending. To prevent this you will have to recruit new warriors, improve their characteristics and learn magic spells capable of freezing, poisoning and incinerating your enemies. In addition to the endless mode, the game features a PvP arena, four mini-games and a huge list of challenges.