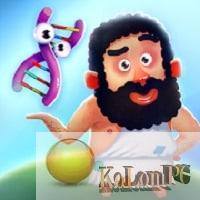 Human Evolution Clicker Game: Rise of Mankind is a fascinating arcade project from WazzApps Casual with clicker mechanics. The developers know very well how to make a very, very outstanding project in this category. Beautiful graphics, a very extensive and long-lasting development system, a share of humor, as well as an exciting gameplay will really please all lovers of the genre. Players are encouraged to take the role of a powerful creature and go through the entire human evolution in their own unique way. Combine, cross, experiment and get incredibly original results that can shock at first. But then they will find application in history.

Human Evolution Clicker Game: Rise of Mankind – a colorful arcade game in which you need to engage in the development of life on earth. Try to create new creatures and populate this world.

The first thing you have to start with is combining DNA. Thus, you will be able to start the evolution process. You need to drag one element to another with one finger and get something new.

Each creature you create will bring a certain amount of coins throughout the entire time. The higher the creature, the more coins it will earn for you. You can spend them on buying new types and improving bonuses. For crystals, you can buy older creatures and evolve much faster. You can also click on the creatures you created and get a little more coins, but for this you will have to constantly tap on the screen.

The following elements act as improvements: the time of the appearance of a new DNA bubble; a piggy bank that will be filled with coins when you are not in the game and a magnet that automatically attracts creatures. Over time, you will be able to go through all stages of development and open access to new, more colorful worlds filled with unusual types of creatures.