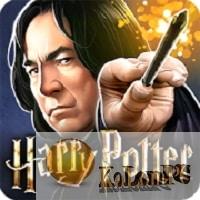 HarryPotter: Hogwarts Mystery – an adventure role-playing game based on the popular literary work. According to the plot of the game, the main character receives a letter from the Hogwarts School of Witchcraft in which he is invited to study magic. Without hesitation, you accept the invitation, and once in a magical place you have to not only learn the basics of magic, but also explore the world around us by studying mysterious rooms, solve puzzles, interact with various characters. Separately, it is worth noting the excellent graphics in a drawn style that conveys the whole atmosphere of magic and fairy tales.

Harry Potter: Hogwarts Mystery is an adventure game with a lot of fascinating quests, where you will have to go to the school of wizardry and wizardry Hogwarts.

Unfortunately the story is only partially intertwined with Joan Rowling’s creation. You won’t see your favorite characters, except for the teachers, who will instruct the protagonist and his friends on the right path. The action of the game will take place a long time before the birth of Harry Potter, but even in those days, beloved by many people the school, concealed a lot of mystery and interesting moments.

The gameplay of the project is built around a lot of dialogue and quests. As the dialogue, you will need to choose a side and the development of certain events, which ultimately affect the development of the storyline. The protagonist will be able to learn magical disciplines, brew potions, fly on a broomstick and many other things we are so used to in the Harry Potter universe.

The gradual passing of the game will allow the protagonist to find new friends, and initially they will be very negative, but with time you will be able to win their favor and respect. The dialogues seem to be a little bit slow, the tasks are sometimes repetitive, and the wands’ movements don’t seem to be as interesting as at the initial stages of the game. Anyway, if you are a real fan of magic and wizardry, Harry Potter: Hogwarts Mystery will be a great find for you.

Mystery and Adventure
Use your magical skills to investigate mysteries at Hogwarts.
Discover the truth behind the Cursed Vaults and your brother’s disappearance in an all new story.

Friendships that Matter
Bond with your housemates to win the House Cup.
Go on quests to help friends and fellow students…or frustrate rivals.
Earn respect and build relationships by adventuring together.