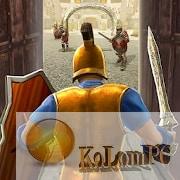 Gladiator Glory – a cool action fighting game in which players can try themselves as a gladiator of the Roman Empire. They will have to fight not only on arenas, but also in other scenery and conditions. But in any case, it will be very spectacular and impressive spectacle and action. Beautiful graphics, smooth animation and convenient control, which offers a huge number of blows and techniques, depending on what the character is equipped with, make the gameplay really unforgettable experience. Practice, improve your skills and follow the steps in the story.

Gladiator Glory is a bloodthirsty third-person action game in which you will become a gladiator and fight on the prepared arenas.

Once you were a glorious warrior of a powerful army, but your regiment was defeated and you were captured. Now, on the fun of the public you will fight against the best gladiators in the unusual arenas, trying to win each battle.

There are several game modes: a storyline divided into hundreds of levels, an arena filled with real players and tournaments with valuable prizes and stronger opponents. Once in the arena, you will have a sharp sword, club or other weapons, a wooden shield and the ability to move freely around the location. To win, you need to deal with the enemy using whiplash sword blows, as well as not forgetting to block enemy attacks in time. If you win, you will get coins, experience points and other valuable items.

Between the battles you should return to the main menu, where you will be waiting for the main character, who needs to train and teach new techniques, raise the level and increase endurance. The stronger your gladiator is, the more chances you have to win the battle against real players.