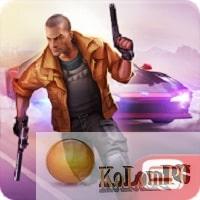 Gangstar Vegas – mafia game – the coolest GTA action game from Gameloft. It has beautiful graphics, a huge seamless world available for exploration at any time, a large number of different vehicles, its upgrade, tons of weapons, and, of course, a living world in which something happens all the time. Different tasks, the ability to create your own gang or lead a normal life, choose the role of a MMA fighter or a tank crew and poison raznosyat city, as well as many other will not let any fan of dynamic third-person games get bored.

Go to Las Vegas and plunge into the world of crime and gangsters. Try yourself as a young fighter without rules, who according to the game’s plot should have lost his fight, but accidentally won and now he has to work off his debt to the local mafia.

If you are a fan of the GTA series, you will love this game. You will have a huge open world, a linear plot, and unlimited possibilities that allow you to do what and when you want. Missions are also plentiful, they don’t end up in endless shootouts with other gangs, but offer us to rob banks, free hostages, participate in races and much more.

The familiar joystick, tilting the device, and the function buttons on the right side of the screen are responsible for the controls in the game. When your character gets in the car or on the motorcycle, the control changes a little, there are more buttons on the screen, but in general this has no effect on the gameplay. The developers and designers did their best to work over the graphic part of the game, they worked out the models of cars and buildings, realistic physics with cool animation effects and perfect soundtrack that plunges us into the world of Las Vegas Mafia.