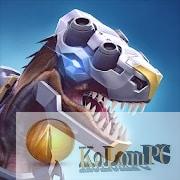 Full Metal Monsters is a multiplayer online action game in which events unfold in a post-apocaleptic world, and the fighting takes place in a 5 by 5 format. The main feature of the game is that you have to fight using modernized dinosaurs, while you will have a wide selection of dinosaurs, both ground and capable of attacking from the air, and an impressive arsenal of weapons and equipment will allow you to maximize the capabilities of creatures.

The game has 3 main dino types, including: