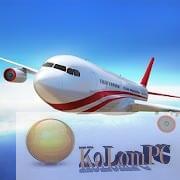 FlightPilot Simulator 3D is a wonderful, very high-quality flight simulator offering players exciting gameplay with beautiful graphics, attention to details, simple controls that will not create any problems and many other qualities that made the game incredibly popular among fans of the genre. They gain access to various aircraft models (light-engine, passenger liners, cargo ships, fighters and others), access to tasks, tests and contracts, an improvement system, as well as career growth. Well, weather effects, difficulties and much more makes the gameplay even more intense.