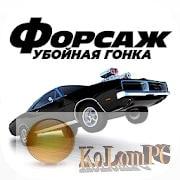 Fast & Furious Takedown – dynamic arcade racing in which you will have the opportunity to show everything you are capable of in such a popular racing direction as drift, while apart from the drift you can perform all sorts of tricks, overtakings, studs and more. We should also note the rather harmonious combination of arcade physics and excellent graphics with a fairly realistic performance, including the presence of more than 60 real-life and licensed cars. Not without a broad system of development and pumping.

COLLECT & UPGRADE CARS IN YOUR GARAGE
Build your dream garage with various combinations of cars and customizations. Pick up your favorite ride and show off your customization to take down your opponent in style.

LEAVE CHALLENGERS IN THE DUST
Race against real drivers from around the world to compete for respect and dominate your way to the top of the league.