Farabel is an android strategy where you will take control of the main character and take part in mass battles. In this game you will control the main character, who has a unique opportunity to go back in time. But because of the fact that he is jumping into the past, he is weakening and he needs your help. Pump your hero, develop his strategic and mental qualities and try to survive in this dangerous world. 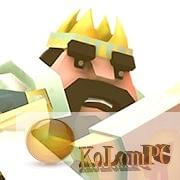 The game has three modes in total: Company Mode, where you’ll go back in time to take part in 13 epic and challenging battles. The classic mode will delight players by gathering a huge army, purchasing units and military equipment. There is also a defense mode, so kill as many enemies as you can and become a hero.

Gamers will start the story campaign from the end. A protagonist named Kendor is already defeated, enemies are overthrown, and the army is able to deal with any problem. And then level after level they will get weaker and the situation for the character will undergo negative changes with each time. Ahead or should I say behind them there are 13 missions, a gradually decreasing set of units, as well as very modest resources and opportunities.