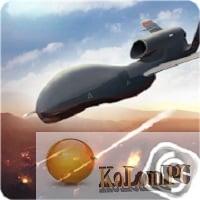 Drone : Shadow Strike is a war game that involves a mixture of strategy with fast-paced combat and real-world action on the screen. You will be able to control the most modern arsenal of weapons (guns, guided missiles, bombs, 4 types of weapons). You need not only to repel the enemy’s military strike on your bases, but also to defeat the enemy on its territory. Collect points and buy improvements to your game. Your main task: protect, win and most importantly – to survive.

They will have both existing models and futuristic prototypes at their disposal. The same can be said of weapons, which can be hung before operations begin. Gamers will patrol space, conduct reconnaissance missions, identify and locate threats and wanted targets, destroy them with targeted strikes, cover operatives on the ground, and much more, which will require focus, accuracy and a cool approach to the task.