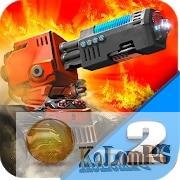 Defense legend 2 – Get ready for an epic battle in this android strategy, where you will defend your base from enemies. Travel around different worlds and countries and use defensive towers and turrets to protect yourself from enemies. Become an experienced general and give masterful orders to destroy all enemy forces that will attack you from the ground, air and water. Place your turrets in the key points of the map and use the various weapons that will be in your arsenal. Moving around the many maps of the game, you’ll enjoy great graphics and sound effects.