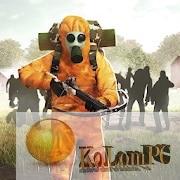 Dead Zed is a shooting game in which players will try to get to the point on the map that their character needs. Due to the fact that outside the window zombie apocalypse will have to move short jumps between objects, which can be a short-term refuge. But not always these actions pass unnoticed for mutants. Having smelled a live target, they immediately, in crowds from all around, will try to eat the main character. In such situations, he will occupy a high ground and shoot everyone who gets too close. At this point, gamers will demonstrate their skills of accuracy and agility.

One of the largest cities in the world has started an epidemic. All news channels report about the dead, who are brought to life and hunted by ordinary people. Monsters driven by hunger and human blood.

The hero is located somewhere on a tall building and is waiting for the next wave of enemies. Someone moves slowly, someone, on the contrary, is running head over heels, while others have no legs and are forced to crawl towards the shooter. You have to aim with the help of piles, trying to point the weapon directly at the opponent’s head, and then release the hook. A couple of precise hits in the head will kill the zombies, and you can begin to destroy the next one.

For each killed enemy you get money to spend on buying and improving weapons, ammunition, first aid kits and grenades. The game has a lot of missions, several dozen types of enemies and a huge arsenal of firearms, which will help against the most unusual mutants. Clear territories, earn money and open access to new, more complex missions.

CHOOSE YOUR WEAPON
You wouldn’t go walking into the zombie apocalypse empty handed! Unlock and upgrade a range of weapons, including handguns, machine guns, crossbows, sniper rifles and more! Build the ultimate arsenal of weaponry that any true survivor of the apocalypse should have.

In each round you can bring up to two weapons. Choose wisely!

UNLOCK NEW LOCATIONS
Nowhere is safe! Complete each location and move onto new ones as you search for a safe haven. Start in the once-peaceful suburbs and move onto new locations including eerie farms, an abandoned city, an industrial neighborhood and beyond!

At each location you must protect your base from being infiltrated by zombies.

FIGHT FOR SURVIVAL
Surviving the zombie apocalypse won’t be easy. Have you got what it takes to defeat the zombie hordes? Download now and find out!