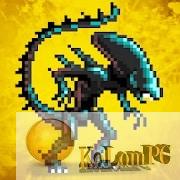 Dead Shell: Dead dungeon is a great role-playing project from HeroCraft with pixel graphics, random generation of locations and events, as well as all the necessary aspects of gameplay that can easily capture the minds of players who love this genre. Gamers in the role of the commander of the combat squadron of paratroopers guarding the important cargo flew to a remote planet where the colony is located. Only there a little earlier arrived alien monsters and made a fierce nightmare. The main character is not going to give up and starts organizing raids deep into the captured territory in order to destroy the enemies, collect intelligence, supplies and everything else that will hold out until the arrival of the fleet.

Blaster-wielding mercenaries vs beasts from the labyrinth: who will win? You’re commanding a die-hard assault squad. Destination: Plutonia, a settlement on a Doom-4 class planet. Shuttle cargo: a range of lethal weapons, from axes and chainsaws to blasters and BFGs. Anything might come in handy in Plutonia, the Federation’s most remote colony.

Scientists, miners, guards – all sorts of civilian personnel worked there until recently. A week ago, the Center received a mayday signal from the settlement. Demonic roars and screams of terror filled the comm channel, and then it fell dead silent.

It’s time to descend into the infernal abyss and show the demons who’s the boss here. Fight your way through all the circles of hell to reach the very bottom. Look cosmic evil in the face and emerge victorious.