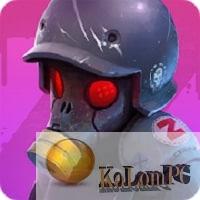 Probably many zombie fans remember a great arcade called Dead Ahead in which you had to drive a motorcycle running away from the hordes of zombies. In the continuation of the game the developers decided to move away from the arcade component and draw our attention to another genre.
And so, the second part was called Dead Ahead: Zombie Warfare, and the gameplay is made in a combination of strategy and tower defense genre. The plot starts from the moment when your bus gets ambushed, there is a real barricade and a crowd of walking dead, but there is a lot of workers and a rich arsenal of means at your disposal, so the success of rescue will depend only on your intelligence and skill.

DEAD AHEAD: ZOMBIE WARFARE
Resist and defy the evil undead in this new tactical survival sequel of Dead Ahead!
Fight for freedom and become a fearless slayer of the undead in one of the funnest survival
games of the year! Kill raid after raid of zombies, collect supplies, look for survivors and
most importantly… create your own legacy!

ZOMBIE INVASION
Defend your bus and endure opponents scarier than any devil or demon! Break through
barricades while you slaughter the corrupt corpses. Gather your team of gladiators and send
them one by one into battle! Use any means necessary to ward off the horde of pixel crazed
flesh eaters! Slash, shoot or burn the dead with barrels, Molotov cocktails and grenades. Be
direct and explosive or stealth kill your opponents.

USE YOUR BRAINS, DON’T LOSE THEM
Show that you have real steel to conquer the maps! Be creative and combine different types
of units to win! Use tactically offensive and defensive moves to kill all the zombies and the
barricades! Be creative and assault them for maximum bloodshed. Remember – the rising
dead won’t make it easy for you.

IMPROVE YOUR SKILLS AND GEAR TO STAY ALIVE
Collect items, earn experience and complete quests to upgrade your units and vehicles. The
more gear you get, the more zombies you will be able to take on! Become the ultimate slayer
of the undead! Banish the banshees to eternal hell! Contrast your high score with other
players!

How to use the APK file to install Dead Ahead